Sneaking up on mud

In between mud sample collections, Uncle Clay Ching, of Hallelujah Hou fishing on Molokaʻi, gave us a crash course on throw net fishing on one of the largest fringing reef flats in the world. He taught us how to throw net, how to step softly, how to walk between the crests of a wave, and how to angle yourself so as not to disturb the fish by even a fraction of a sun ray. And now, back on O‘ahu, as I wade through the waist-deep mud of an area cleared of mangroves, I can’t help but try to emulate Uncle Clay as I sneak up on the mud in front of me.

Um, what? Sneaking up on fish is understandable, but sneaking up on mud? Why bother? It’s only mud after all. Whatdoes that mean? How does one sneak up on mud? It’s not going anywhere. No exciting chase there.

The small “why.” One reason we want to sample the mud is incredibly small in scale, but great in magnitude. Marine microorganisms (bacteria, archaea, and protists like fungi, choanoflagellates, ciliates, diatoms, and dinoflagellates, etc.) are tiny. They are less than one-hundredth the width of a human hair, too small to see with the unaided human eye. But do not let their unassuming size fool you; these minuscule (and abundant!) organisms provide approximately 60% of the oxygen we breathe and have dictated the fate of the planet for the last 3.5 billion years. And this mud is where we think some important ones live.

Another reason is much larger and stately in nature, a marching red giant, with seemingly infinite roots outstretching, grasping, reaching, digging, and clawing for more light, more minerals, more purchase to keep on marching. Rhizophora mangle, or red mangrove, was introduced to the islands just over a century ago and has marched its way across the landscape, fragmenting fishpond walls, infilling ponds, and swallowing reef flats.

Many native Hawaiian fauna are simply “mangrove-intolerant,” in much the same way that human populations that have historically abstained from dairy products have become lactose intolerant. Hawaiian fauna have not evolved alongside mangrove trees, or really any terrestrial, woody, intertidal plants, and are unable to digest their toxic tannins and complex lignocellultic structures.

To other invasive species, mangrove is the equivalent of celery, in both its nutritional value and its appeal: crunchy, fibrous, and theoretically requiring more carbs to digest than it provides. So perhaps it should have been no surprise when introduced Samoan mangrove crab showed a preferrence for tasty, native polycheates (worms) and limu (seaweed) over the browning stalks of bland mangrove.

So what does eat mangrove? We know that some bacteria and fungi can and do, in other parts of the world. Our research aims to establish whether they are present in Hawaiian invasive mangroves. We are also testing whether these mangrove-munchers show signs of local adaptation and development in the oldest stands in Hawaiʻi, on the south shore of Moloka‘i. We predict that microbes in older Hawaiian mangrove forests have become adapted to breaking down mangrove leaf litter more efficiently, as compared to those in newer mangrove forests. We are also exploring whether these microbes are still present in the mud (at various year increments) following mangrove removal from He‘eia Fishpond, and for how long after their primary food source is removed are they dominant members of the microbial community.

Here’s the fun part. There are two ways we, in the Alegado Lab, sneak up on mud, determined entirely by the environment in which the mud is hiding. Whether in a dense mangrove stand or a thick mud flat, where you are the heaviest thing around, the only way through is through.

Method 1 — A Mangrove stand. These stands are not the towering, monolithic mangroves that can be seen around Hawaiʻi and that may call to mind the redwood forests of California. These stands are thickets of (nearly) impenetrable seedlings where the trees grow in claustrophobic densities. One can cut a way through the mangrove stand, I suppose, if provided an adequate number of undergraduate students. However, our preferred method, given budget constraints, is the world’s worst impression of contortionistic ballerinas.

Rocking my water-logged tabis and heavy bags of scientific equipment, I force myself through the small openings, pushing thin branches aside and weaving my person around the thicker branches, roots, and trunks. I gingerly jeté from one outstretched root to another with a whispered prayer that the root will hold, lest I go crashing several feet down into an ankle-twisting pit of tangled roots and murky knee-high water. When I spot the mud I wish to collect, with a mallet in one hand and sampling corer (a sawed-off PVC pipe) in the other, I delicately crouch down an arm’s length away. I position the corer just above the mud, below the waterline, and then I strike, bringing the mallet down hard, eyes already shut against the backsplash of murky, brown water to follow.

Method 2 — A Mud Flat. By comparison, method two is more like a bad spa day. Mud just above my waist (I’m on the shorter side), I slog one leg in front of another, not so much stepping over the mud as wading through it, looking like a villain that got caught in his own freeze ray. Gases produced by the microbes within (not by me), now disturbed, bubble up to the surface releasing foul-smelling methane and sulfur into the air around me. Once some choice mud is spotted, the process is similar though much, much slower, so as not to disturb the desired sampling surface while submerged in the surrounding mud and water.

Bringing it all together

This project, and all of our efforts to sneak up on mud, will ultimately provide insight into the sensitivity or resilience of Hawaiian coastal ecosystems to mangrove invasions. The success of local Hawaiian fisheries depends on the informed management of invasive mangrove forests. Understanding how mangroves change vital microbial communities over time is critical as Hawaiʻi seems to face a future of cohabitation with the red mangrove. 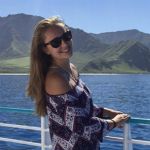 Becca Lensing is Ph.D. Candidate in Marine Biology in the Alegado Lab at the University of Hawaiʻi at Mānoa. Her dissertation research focuses on measuring the impacts of various disturbances (storms, the change of seasons, and invasive species) on microbial communities in tropical, volcanic-island estuaries. She’s from the small farming community of Decorah, Iowa, attended Cornell College in Mount Vernon, IA, before pursuing her graduate degree.