Feed me! How examining larval diets could be a game-changer for aquaculture

Next time you visit your local pet store, take a look at the fishes. Many of the freshwater fishes available to you have been bred and raised in captivity, but most marine fishes have been harvested from the wild. In 2019, only about 12% of marine fishes available in the aquarium trade were captive bred. Wild harvesting can put undue stress on marine populations, particularly those in reef ecosystems. So why aren’t more marine fish raised in captivity? It is not as easy as you might think.

Breeding is only half the battle. After their eggs hatch, many marine fish species have a lengthy larval stage—a long, complex journey before transforming into juveniles and settling on the reef. As larvae, they look very different from their adult counterparts, occupy different habitats, and what they eat is largely unknown.

Stomach content analysis is the standard practice for determining what fish eat in the wild. In the traditional version, fish stomachs are removed and contents are identified visually. This requires extensive knowledge about the various types of tiny plankton, and much of the stomach contents are impossible to identify because they are soft-bodied or in various stages of decomposition. The non-scientific term is a “gooey mess.” Besides, larvae are very small, making such traditional dissection non-trivial.

Recent advances in genetic technology have come to the rescue, allowing identification of prey items without the mess. For my Hawai‘i Sea Grant Graduate Fellow research project, I have been using metabarcoding—the genetic identification of many taxa in a sample—to resolve what the larvae of wild marine fish are eating. This is a breakthrough for elucidating larval food that would otherwise be impossible to identify.

Currently, the larvae of captive-bred marine fishes are fed a combination of copepods, rotifers, and artemia. These foods are easily culturable and fairly inexpensive to produce, but it appears they aren’t what larvae are actually eating in the wild. Using DNA barcoding technology, we can discover precisely what those marine larvae are eating as they grow and develop for weeks or months. This gives us a much better chance to raise such marine species in captivity. 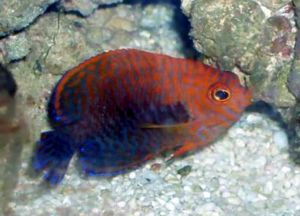 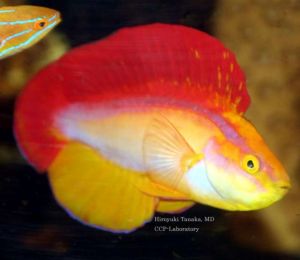 So, why is this important? Recent bans on collecting coral and fish in places like Hawaiʻi, Fiji, and Indonesia emphasize that aquaculture is the future of the marine aquarium trade. The Hawaiian moratorium means prized ornamentals found only in Hawaiʻi, like the Potter’s angelfish (Centropyge potteri) and flame wrasse (Cirrhilabrus jordani), will likely disappear from pet stores. Other fishes, like the achilles tang (Acanthurus achilles), occur in other locations, but have previously only entered the aquarium trade through the Hawaiian Islands. It is likely that in the very near future, more ornamental fish exports will dwindle or disappear altogether from the aquarium trade if their only source remains wild harvesting. Culturing these fish species, as is done already for many freshwater fishes, is clearly the best long-term, ecologically sound solution to maintaining a supply for aquariums.

Not all of the preferred larval foods identified from our work are necessarily easy or cheap to raise, but we hope our results will ultimately make it easier to raise these prized marine fish, so that both reefs and aquariums can feature the beauty of Hawaiian fishes. 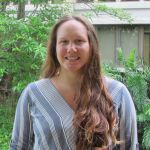 Cassie Ka’apu-Lyons is a Ph.D. student in the Toonen-Bowen lab at the Hawaiʻi Institute for Marine Biology studying larval fish ecology, and she loves to browse the fish sections of pet stores!