This stunning mural sits at the entrance to Hanauma Bay's Visitor Center and details the colorful collection of marine life found at Hanauma Bay. Explore Hanauma Bay and learn more about our wildlife by clicking on them in the mural. 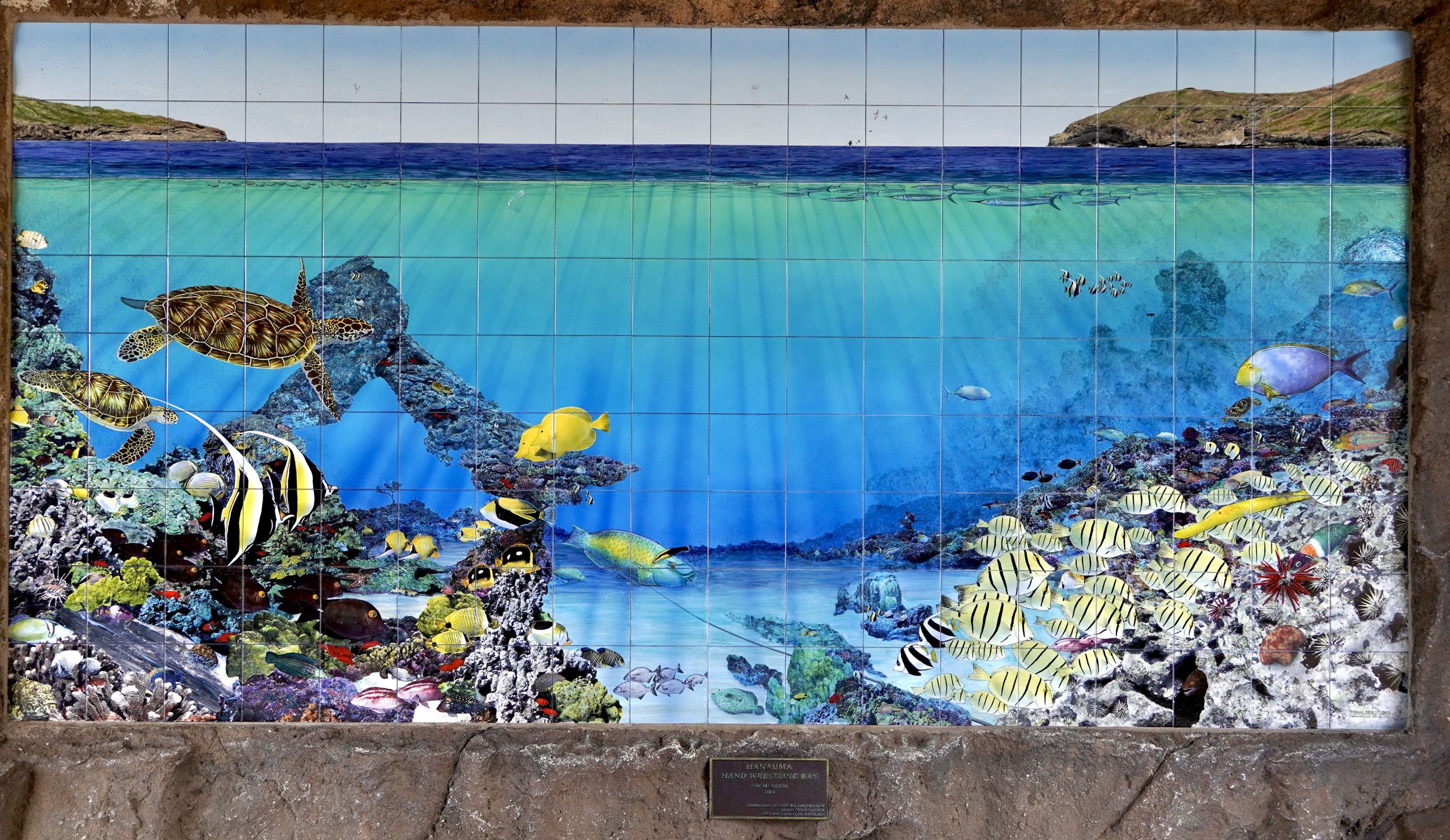 Found in large schools. Feeds on algal reef flats. Named convict tang for the six vertical bars going down the body. The Hawaiian species has a small black bar under the pectoral fin.

The fish brought in by the rain at sea. The spawn of the manini fish that came to the islands by the millions during the summer months. They were said to come after a shower at sea, in the early morning.

The Hawaiian name describes its snout-like nose; like that of a pig. Puaʻa means pig in Hawaiian. They use this snout to feed on urchins in the reef. Nesting triggerfish are known to defend their nests from swimmers who venture too close to them. In the mural, this triggerfish in particular is pointing to Hanauma Bay on the island of Oʻahu. Can you spot the outline of Oʻahu in the mural’s reef? 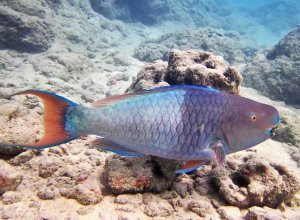 Parrotfish are a group of fish found throughout the Indo-Pacific region. These large animals come in a variety of colors and sizes, but their most prominent feature are their strong beak-like teeth which they use to graze on coral reefs. As they scrape algae off of the reef they also ingest and process the coral in their bodies. The end result is ground up grains of sand that the fish releases into the water. The Hawaiian name "uhu pālukaluka" means "loose bowels".

While common on many reefs, the parrotfish found in Hanauma Bay are some of the largest that can be seen in Hawaiʻi. Outside of Hanauma Bay's protections, parrotfish are regularly caught for food. The removal of large herbivores off of reefs has proven to be very harmful to Hawaiʻi's marine environments like Kāneʻohe bay. Without these herbivores on reefs algae has spread widely, suffocating many of the corals.

The Hawaiʻi Institute of Marine Biology has worked hard to manage algal blooms through the introduction of native urchins to continually graze on algae, but over fishing still poses a threat to other reef ecosystems. We can continue to improve our reef ecosystems by taking a few simple actions. Remembering to shop for sustainably harvested fish helps to discourage over fishing. When fishing, remember to observe size regulations and to take only what you need.

NOAA - Get to Know Your Seafood

Kihikihi feed on sponges and encrusting invertebrates along the reef and can be found singly, in pairs or in groups. They have a triangular body with black yellow and white bands, and a long white dorsal fin. 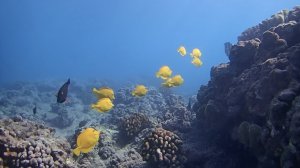 With the exception of their white tail spine, these fish are entirely yellow. Their Hawaiian names make reference to this, meaning “Yellowed Leaf”. As juveniles these fish are territorial, but mellow out as they mature.

Hidden amongst the corals and reef is a strange coral head with much to say. One translation of the name "Hanauma" is "Arm Wrestling Bay", and is visualized by this distinctive, though fictional, coral head representation of an arm wrestling match. Within this coral head is the silhouette of the island of O'ahu, with Hanauma Bay highlighted by the nearby Humuhumunukunukuapua'a.

You can learn more about the place names around Hanauma Bay here. 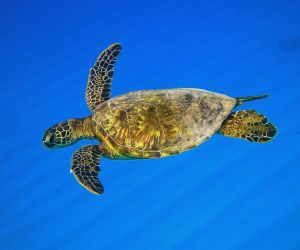 Green sea turtles are found globally in tropical and subtropical climates. Green turtles get their names, not from the color of their skin or shells, but rather the color of their fat, which turns green due to the algae that they eat. Turtles can live well over 70 years in the wild, but do not reach maturity until the ages of 25-35. Green sea turtles spend a majority of their lives at sea, however in Hawai’i they occasionally pull up onto beaches to warm themselves; a behavior uncommon in other green sea turtle populations.

Globally, green sea turtles are listed as an endangered species, meaning they face the threat of extinction in the near future. Turtles face many threats such as loss of breeding grounds, hunting by humans, as well as pollution like ghost nets and marine debris. Turtles will often mistake plastics as food and ingest them, which can lead to starvation or choking. Turtles can also get tangled in stray nets and fishing lines. Due to these threats coupled with their slow reproductive cycle, these turtles are slowly declining in population.

While many populations of sea turtles are declining, the Hawaiian population of green sea turtles has risen greatly over the past few decades. This is thanks to heavy conservation efforts made to protect these animals as well as efforts made by the public. Simple actions such as participating in beach clean-ups can help by removing plastics, nets, and fishing line off of beaches before they wash out to sea.

To learn more you can visit:

If you see a turtle in trouble you can call:

Corals are found around the world in tropical and subtropical climates. While they may look like rocks, these are actually animals that form large stone-like structures in many shapes, sizes, and colors that we call reefs. Corals serve as both food and shelter to a wide variety of marine life and are the foundations of near shore ecosystems. Corals grow very slowly, less than one inch per year, and can live to be hundreds, even thousands of years old. Corals thrive off of an algae called zooxanthellae that grows inside its own body, as well as by collecting floating nutrients in the water. These zooxanthellae are what give each coral species its distinctive coloration.

Corals are threatened around the world due to pollution and rising ocean temperatures. When ocean waters become too hot corals will "bleach", the act of expelling their symbiotic algae from their bodies, which exposes the bare white skeleton beneath. Without this algae they lose their main source of nutrient and can die. Equally pollutants and harmful chemicals can stunt growth and harm coral reefs.

A simple act we can take to protect reefs is the use of reef-safe sunscreens. Some sunscreens use harmful chemicals such as oxybenzone and avobenzone, which are harmful to both humans and marine life. Switching to mineral based sun protection, or full body coverings while in the ocean can greatly reduce the presence of these chemicals on reef ecosystems around the world.

To learn more about visit:

Commonly found in shallow waters, Keeltail Needlefish rest just below the surface of the water where they await their prey. Their narrow mouths are filled with sharp teeth, which they use to capture prey and swallow them whole. They are often seen resting during the day and feed at night.

Plastics that make their way into the ocean can float for long periods of time, slowly breaking down into smaller and smaller pieces. Many fish, like the needlefish, feed at the surface of the water and can mistake these small fragments, called microplastics, for food. Once eaten these plastics can fill an animals stomach leading to an early death. These fish, much like needlefish are also preyed upon by other larger animals and can pass on their plastics to the next animal that eats them. This process of passing harmful chemicals and plastics from one animal to another up the food chain is called biomagnification.

These plastics can even make their way onto our own dinner plates. Which is why recycling not only helps the animals, but us as well.

This stunning mural sits at the entrance to Hanauma Bay's Visitor Center and details the colorful collection of marine life found at Hanauma Bay. Explore Hanauma Bay and learn more about our wildlife by clicking on them in the mural.