EXPORTS is a joint investigation, by NASA and the National Science Foundation, to study the ocean’s carbon cycle. During the summer of 2018, researchers headed out to the northeastern Pacific Ocean on board the Research Vessels Roger Revelle and Sally Ride. The goal was to to collect data about water chemistry, currents, and organisms—in order to better understand the ocean’s food web and how carbon-containing material makes its way from the surface to the deep sea. Since returning from the expedition, EXPORTS scientists have been identifying organisms, analyzing samples, and working together to make mathematical models of carbon flow in the ocean. The goal is to use these models, in combination with satellite imagery, to make real-time observations and predictions of the global climate from space. All EXPORTS data will be made publicly available online.

Watch the trailer for Season 7, Episode 7 on Vimeo or on YouTube.

(with archived researcher comments from our premiere and watch party on Sep. 24th, 2020.) 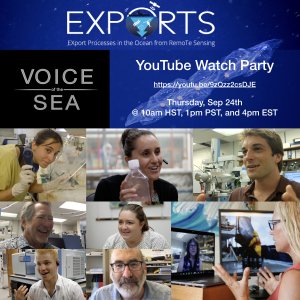 This episode is also available with English subtitles on Vimeo and Youtube.

Select a season of Voice of the Sea