A day of surveying starts with arriving in Waikīkī early in the morning. As I sit down at the Starbucks Reserve store with a coffee, I start to plan out the survey day. I am joined by our three student surveyors, who were recruited from a different, previous survey at Kailua Beach Park. As we head to the day’s starting point, the Duke Kahanamoku statue at Waikīkī Beach, the number of people slowly increases as the area starts to wake up.

From our starting point, surveyors fan out in both the Diamond Head and Ewa directions, iPads in hand. As they walk along the beach, my surveyors randomly approach people enjoying themselves, asking politely if they will participate in a short survey. Some decline, but surprisingly, the vast majority say yes. Using a provided iPad, the respondent answers a survey on their recreation behavior and preferences, for about 15 minutes. The surveyor thanks the respondent, and continues on their way, forging a path down the beach and talking to people as they go.

This continues all morning, until the surveyors finally call it quits in the early afternoon. After I collect the iPads, I head back to Starbucks for another jolt of caffeine, and there I upload the data collected for the day and take a quick look at the results on my computer. When everything looks to be in order, I too head for home.

This is not my first time doing fieldwork that involves asking people for their opinions, measuring preferences and behavior. I’ve previously conducted surveys on Oʻahu beaches with lifeguards, in West Maui, and in Guam with scuba divers, each study evaluating users’ willingness to pay for services and a quality experience. Surprisingly, people are generally happy to talk about their experience, expending some of their valuable recreation and/or vacation time. What’s more, people often talk about themselves: what they’re doing at the beach, why they come, and what activities they like.

Fundamentally, my research as a Hawaiʻi Sea Grant Graduate Fellow is working on putting a price on the natural environment through econometric modeling and understanding recreationist preferences. Surveying strangers and modeling may not be everyone’s cup of tea, but it is important to get a real handle on how people view beaches and the environment.

While nearly anyone we ask will say something nice about the environment and tell us it’s “priceless,” in reality that translates to “price-less.” That is, when decisionmakers are tasked with making a choice between the environment and something else, perhaps some number of jobs, economic activity, etc., they often see the trade-off as the economy versus something that has no price. As a result, the environment usually loses out, to the detriment of people and society, in general, not to mention the effects to non-human users of the natural environment. But our surveying and modeling help us develop a quantifiable, defensible, rigorous estimate of natural resource value, which gives us leverage to encourage better decisions for how to manage the environment and protect it from degradation, anthropogenic or otherwise.

By the way, if someone asks, spending the day on Waikīkī Beach may be “priceless,” but the beach is literally worth billions. 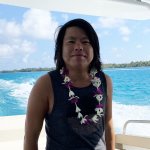 Marcus Peng is a PhD student in the Department of Geography and Environment working on the econometric modeling of relational behavior and valuation of the coastal environment.